Ideas and principles that I frequently return to.

tl;dr: Life has no intrinsic meaning (but meaning is precious) so make some yourself.

Do not become attached to any one idea

When writing a manifesto, it is important to keep this in mind.

See the world from many angles. Dichotomies are powerful tools if you understand their limits: 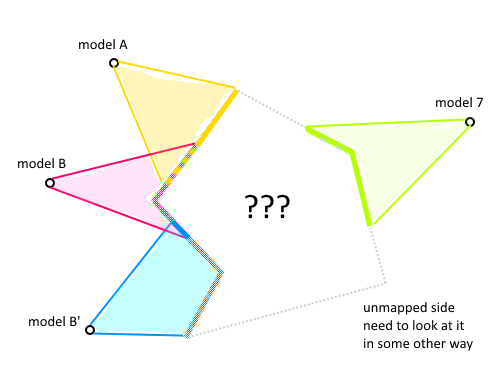 With many enough angles on the same question, you can see its whole shape.

The natural conclusion of this is to have so many fuzzy models working in parallel that they become fully integrated into your thinking and dissolve into a general ‘intuition’. If your models are good, this is wisdom.

I love a good dichotomy. They are never perfect or universal, but they can still be useful for understanding the world.

- System 1 vs System 2 thinking,
- Conflict vs Mistake theory
- any of @vgr's quadrants. https://t.co/jHpLJgzyFT

Previously: I used to want to find the one idea that explained everything — this gave me a lower resolution view of the world.

There are timeless truths

There are timeless truths, many of them sound cliché.

Unfortunately they are difficult to learn through reading. They seem obvious, but only in retrospect.

I cannot learn from reading aphorisms. The best I have managed is to get close to the idea via experience, then read a book that points out the idea, gives it a name, gets me the final 10% of the way there. I’m not sure there is much wisdom that can be learnt from books alone.

This is why children ignore their parents’ advice, only to give the same advice to their children a few decades later.

Mill putts it nicely in On Liberty:

All languages and literatures are full of general observations on life, both as to what it is, and how to conduct oneself in it; observations which everybody knows, which everybody repeats, or hears with acquiescence, which are received as truisms, yet of which most people first truly learn the meaning, when experience, generally of a painful kind, has made it a reality to them.

I did not understand this passage when I first read it. It was only later, when I discovered the concept for myself, that it resonated for me.

This is why philosophy needs to be rewritten for each generation: to use metaphors closer to our own experiences.

The one effective way we have to pass-on these hard-won lessons is by storing them in morality, institutions and ritual — therefore these are valuable and we should think twice before discarding them.

Previously: I once thought I could get everything I needed from books. Experience, it turns out, is very important.

One of those timeless truths is the power of “tit-for-tat, starting with cooperation”.

It is irrational to be nasty, most of the time.

This only holds for iterated prisoner dilemmas where the number of interactions is not known (so a stranger in Paris you will never see again? Doesn’t hold. A neighbour: holds)

A group of cooperative players can invade a population of defectors and thrive. The gains from cooperation amongst themselves is enough to offset their losses from the ‘mean’ players.

'Being nice' is underrated. 'nice' is not a sexy concept, our teachers told us to avoid the word,
but being a genuinely nice person is nice.

A lot of what seem like thorny ethical/political questions are dissolved by niceness.

(Nice != polite, polite can be nasty)

Morality is useful, it is not real

(For some definitions of the word ‘real’)

Clearly moral realism is ridiculous, given that, how should we behave?

Egoism? It seems that common sense morality is egoism most of the time.

Cooperating with others, being nice, caring for friends and family, trying to make the world better.. these are the acts of an egoist.

Our intuitions and moeurs are pretty good heuristics, do what feels right.

The only thing we can be sure of is that there are no utilitarians, at least no good ones: what parent would exchange their child’s life for that of two strangers? 100? 1,000,000?

Imagine a moral nihilist. They do not believe there is any meaning to the concepts of good or evil. They personally desire that humanity thrives far into the future. They also empathise with other humans and wish for as many of them as possible live happy lives. How can they best leverage their own power to bring this about? One way would be to increase the number of utilitarians.

One person can only do so much themselves, but in spreading utilitarianism virally, can control the resources of each person affected.

Peter Singer can reduce animal suffering by refraining from eating meat, he has reduced it much, much more by converting others to veganism.

It would surprise me if there isn’t at least one influential utilitarian philosopher who is a closet nihilist, who only pretends to be believe that utilitarianism is true, simply to further their own selfish desire to better the world.

Previously: I was rather utilitarian, once

The work of cooking a meal was like a closed circle, completed and gone, leading nowhere. But the work of building a path was a living sum, so that no day was left to die behind her, but each day contained all those that preceded it, each day acquired its immortality on every succeeding tomorrow.

Routine tasks can be made into compounding tasks: cooking and eating together as a family strengthens relationships.

Working on something I care little about:
- lots of coffee
- agressive music
- timeboxing
- presetting goals while I start
- browser set up to block twitter

Working on something I actually want to be working on:
-

Having fewer things makes me happier.

Our bondage is self-imposed

Remember always: you chose this. Of all the choices proffered, this was the one you chose, and which you have kept on choosing. This too was once but only one of the things you hoped would come to pass. Any month, any day—nay, this very second, you are offered anew that choice. — Gwern

For people living in the UK: We do not need to work as much as we do if we do not wish to. We do not need to have a new car, a large house, an amazon echo, a gym membership, a new sofa (they are free second hand, this country is amazingly rich).

Every time we pay more for more comfort or enjoyment we are making a trade-off: freedom for stuff.

Down and out is always an option.

However: optimising for freedom alone is probably wrong.

Living alone in a tent, eating cat-food for dinner, may not be the perfect balance of responsibility to freedom for you.

Taking responsibility for a pet, a family, your community, a business — these are all things that reduce your individual freedom while adding meaning to your life.

Fire in winter, sun in summer.

I feel good when I spend time outdoors. In the summer I am in the sun when possible, in the winter a wood-fire in the evening has some of the same benefits.

It is important to be in nature, amongst green things, running water, and beauty.

☀️🧵
So our skin pigmentation is optimized for the latitude each population lives in. There is a trade-off between light-skin (easier absorption of sunshine) and dark (better protection against skin cancer). pic.twitter.com/MVycoSsETn

I am cringing as I re-read each line of this document. It is comfortable to keep all your ideas safely in your head where they can’t be criticised. There they will fossilize.

It is also tempting to be cynical about everything, to protect yourself from criticism.

Put your ideas out in the world:

Twitter has made me more curious and creative. This surprised me!

Thinking is a dialogue with:

It takes effort to live a good, eudemonic life. To take a handful of mud and work it until it becomes smooth and polished.

It helps to have an aesthetic, a narrative, a direction of some sort, although not necessarily an end goal.

It is important to strive.

tl;dr: Life has no intrinsic meaning (but meaning is precious) so make some yourself.