Minimalists (as in internet minimalism: the minimalism of white landing pages and bare walls and shiny wood floors with no furniture on them, the minimalism of hundred page threads discussing the optimal number of underpants, the minimalism of carefully laid out photos showing of all your possessions with prices next to each) – we who practice this type of minimalism are spiritually closest to people who collect every type of coke can ever made.

It is sold as a way to free oneself of physical possessions, but we’re not free. Look at us, obsessing over how many spoons we own. The average person has two drawers full of spoons, and yet they never spend more than a second of thought on them. We with our single, flawless, Japanese import, discontinued, titanium long-handled spoon – how many hours have we spent reading spoon reviews? We reduced the number of our possessions, but only increased our attachment to them.

A quadrant can be drawn, with “how much you are defined by your possessions” on the x axis, and “how many possessions you own” on the y axis. The internet minimalist is down there, in the bottom right. (You’re comfortable down there, aren’t you. You’re used to being in that spot). 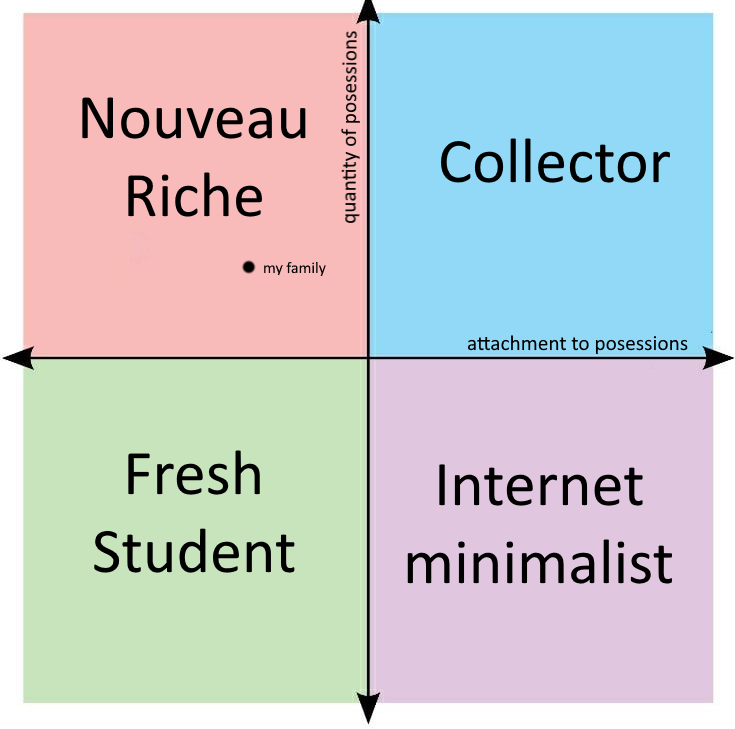 Who’s above us in the top right? The coke can collector. For both of us, identity is tied up with possessions. Both have become defined by a number. One counts how many things he owns. The other counts how few things he owns (including a two-thousand word appendix on why he decided to count each pair of socks as a single item, whereas last year he counted all his socks as one). The minimalist hasn’t achieved freedom from his possessions at all, with each discarded item he concentrated all his attachment onto fewer and fewer things, until the remaining forty-seven-things-if-counting-socks-as-pairs have become fetishised. Backpacks, knives and small bottles of soap all become sacred merely from the intense attention that their owner pays them. Researching each item, comparing them, discussing them and taking photos. Swapping them out for alternatives with tiny variants. “If only I can collect the perfect set of items, then everything will fall into place.” I feel this especially strongly because I live with two maximalists. I don’t even get the benefits of internet minimalism, like quicker moves and easier cleaning. My family are somewhere in our top-left quadrant, they accumulate objects like a dog bed accumulates semi-chewed sticks. They don’t mind living cluttered by things, but they’re not all that attached to them either. This makes any minimalism on my part somewhat of a LARP. I could use a single type of soap for washing clothes, face, hair and body – but why not use the ten bottles of product already in the shower? I could use a single mug that I carefully was after each use – but there are thirty more mugs in the cupboard.

I have only been a true minimalist once before (that is: a person who has little and needs little), when I was a student who just started living alone. In the same way that being a broke student is a very different expience to being actually poor, as a student I not only had little, I was expected to have little. This state of affairs was quite normal and not at all embarrassing. I had a single backpack containing all me possessions in the world. If I needed, say, a frying pan, I wouldn’t spend more than a second deliberating which one to buy – I simply bought the cheapest option available. Like a truly enlightened being, I would have no attachment to his purchase. At the end of the year, I would likely discard the misshapen and blackened artefact without a second thought. One can’t live here for too long however, it becomes sad eventually.

Perhaps I should just lean into my new status then, and acknowledge that I am LARPing. I got a new wallet recently, it is very small and fits only four cards. I still have the old one, in a drawer. I am happy when I look at the new wallet, though. It is very thin and minimalist.